Our Founder and CEO Ardy Lee was invited to Bloomberg TV for an interview on July 14, 2017, at the Hong Kong Bloomberg studio to share the entrepreneurial experience as well as showing the world the unique technical charm of FlyingCodes! Thanks, Anthony Lacavera from Bloomberg TV, good chat! 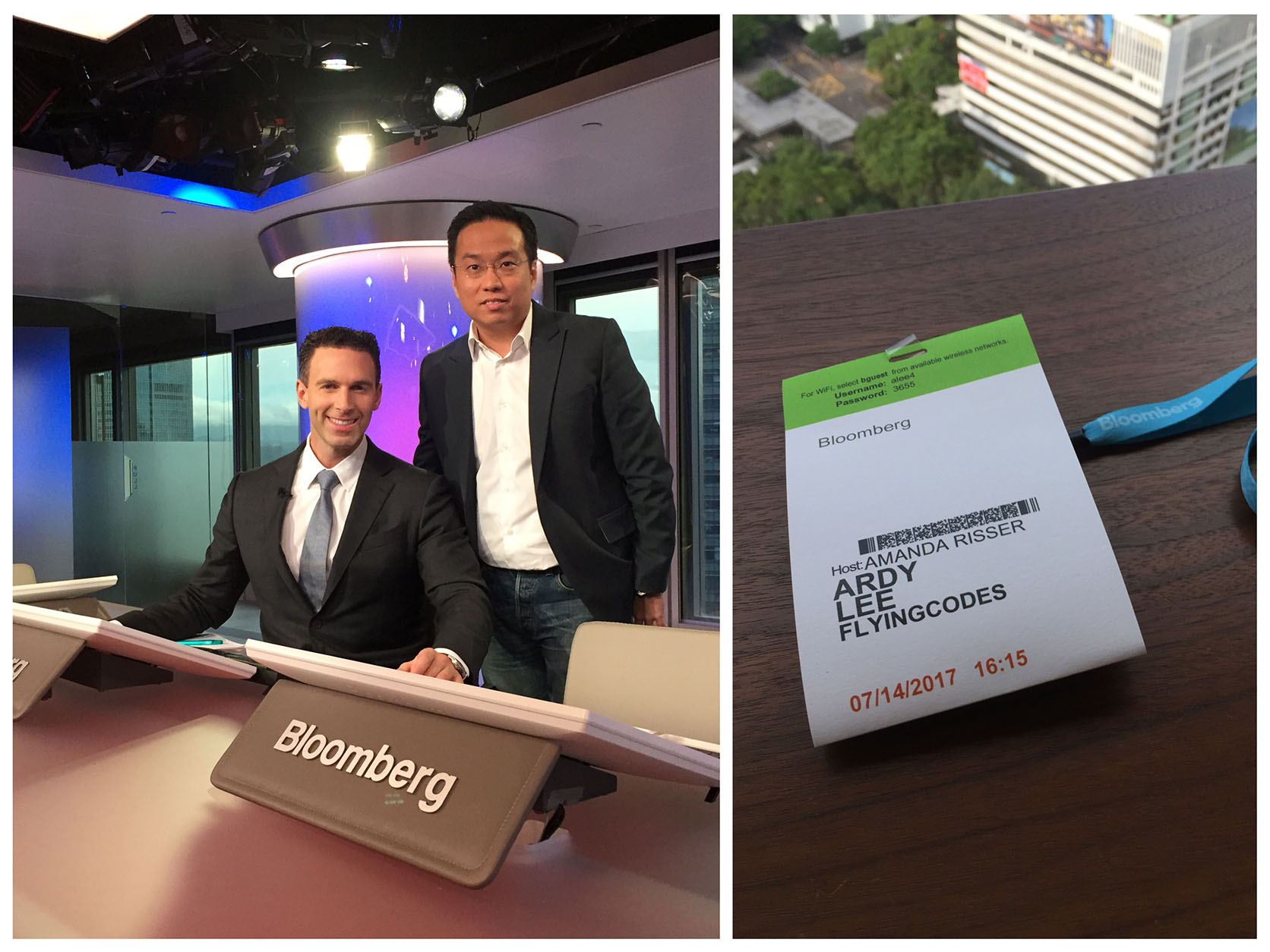 FlyingCodes have been invited to China Mobile Headquarter in Beijing to meet with the R&D director and his expert team at China Mobile Innovation and R&D Lab to introduce FlyingCodes technology and discuss trial detail. 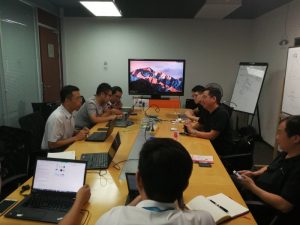 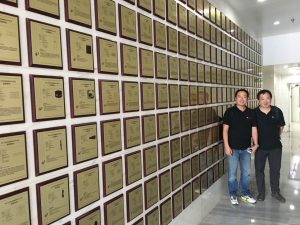 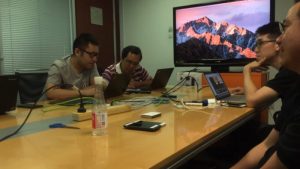 TechCrunch SHENZHEN 2017, June 17th – 20th, 2017 will be held in I-FACTORY, Nanshan District, Shenzhen.  The TC conference not only invited those iconic investment and technology companies like Shenzhen Capital Group and MeituPic but also the founders from many successful start-ups to share their insights on the new innovation and technology trends, TC Conference has also invited Airbnb China President Ge Hong for his first public speech. 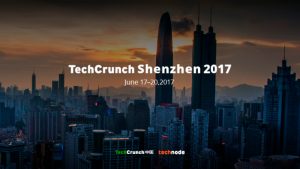 FlyingCodes is invited to attend the TC conference with our new technology developments, with hundreds of start-ups from China and the world gathered in Shenzhen, at the Startup Alley FlyingCodes will be showcasing our new YuLiZhi 2.0 – A comprehensive platform for Retail, Smart home Lodestone IOT module for game-changing Smart device development and Indoor Navigation at parking lot solution which are representing the core technologies of FlyingCodes and our exciting development on the future connected IoT and tracking applications for different indoor environments; we would also offer an olive branch to invite the capital market to help establish the new trend of  “Technology + Home + Eco-Market” platform.

TechCrunch SHENZHEN 2017, FlyingCodes is moving forward to a new journey, will use the “Prehistoric Powers” to work together with different partners to promote new technology innovation on different indoor applications to develop a new “Home + Eco-Market” environment.

The 3 days Consumer Electronics Show Asia (CES Asia) was unveiled in Shanghai at the New International Expo Center on 7 June 2017.  As the technology indicator of the consumer electronics industry, the CES Asia has pooled the leaders in the technology industries across the globe to initiate a gala of “Coming Together, Building Innovation for Tomorrow”.  FlyingCodes, which is devoted to innovation, shines on this year CES Asia with its brand-new “Household-Retail” idea featuring indoor interaction, navigation and business intelligence. 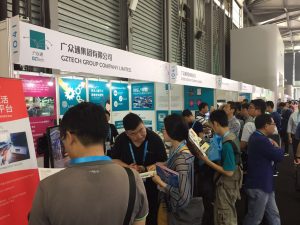 In this show, our company showcased the results of this year’s new R&D, new products and new projects, including the YuLiZhi 2.0, smart device Lodestone IOT module, parking lot guiding and other implemented project showcases which represent core technologies of FlyingCodes and future development directions, having received intense attention from multiple industrial leaders in technological development, solution suppliers, mobile operation, retail brands, commercial property developers and the public.  We have also reached the business cooperation intent with multiple well-known star enterprises across many industries to deploy or integrate our comprehensive platform solution combining retail promotion, driving footfall traffic and big data business intelligence analysis at their chain stores and properties or into their existing solutions. 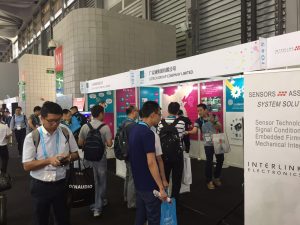 Our technology innovations have not only been applied to business application but also into charitable affairs for the social responsibilities.  Our interactive travelling guiding for blindness people solution has been recognised and praised by the government agencies and the blind. 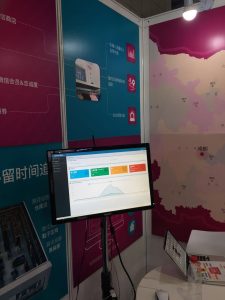 The popularity and development of the FlyingCodes technology have gradually changed the old behaviours and consumption habits.  To our delight, different application adoption of our innovated technology represents the rapid development of FlyingCodes, ultimately benefitting you, me, him and her in our life.  This is indeed the charm of science and technology, lifting our life beyond imagination to real life. 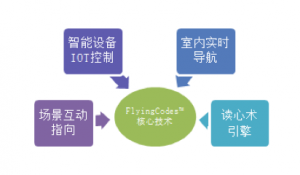 In this year CES, we will be showcasing the results of this year’s new R&D, new products, and new projects, including the YuLiZhi 2.0 with the strong functionality to help small and middle chain store owners to operate and monitor their stores, game-changing smart device module – Lodestone IOT, and our unique indoor “Turn-by-Turn” guiding product – “Personal Guide”.

These new products and technologies are demonstrating the possibility of our core patented technology and the future innovative direction of FlyingCodes.  We are looking forward to seeing you in CES Shanghai 2017!

On May 18, our market development director of the China southwestern region Mr. Ben Song was invited by the Sichuan Nuclear Industry Disabled Persons Association to give a training session on explaining the workflow and introducing a new provincial wide disabled person health service program called “A Contract Doctor”, and received a well recognition and positive response from doctors, healthcare professionals and friends from the China Disabled Persons’ Federation.  Sichuan Nuclear Industry Disabled Persons Association is appointed Mr. Ben Song to be there technology adviser to help the Association to adopt new technology to enhance their services. 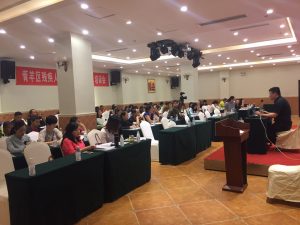 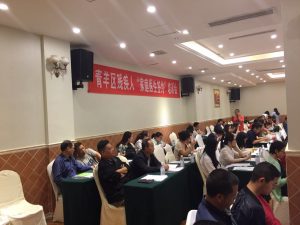 FlyingCodes’ leading technology and R&D capabilities and experience can provide all-rounded product customization and consultation services, we are also working together with leading technology partners and different public welfare and volunteering organizations to drive using new technology to enhance the experience and empowering disability people to navigate the world independently!

On May 11 to 13, 2016, The 13th China Outdoor Advertising Conference was grandly held at Le Meridien She Shan Shanghai sponsored by Asia OOH, and FlyingCodes was invited to attend this conference as a new technology guest, providing corresponding technical support for the real-time guidance and scene-based interaction. This conference regarded “Jointly Construct Outdoor Advertising Circle in the Age of Scene” as its theme to face up possible problems for the future development. Internet of Things Technology and the concept of scene-based marketing were introduced for the first time, which coincided with the standard of FlyingCodes Technology.

Create “Audience Connection” for the Conference

During the conference, FlyingCodes Technology was applied to support real-time information publication and guidance and provide instant technical support for the interaction and guidance of various links, including on-the-Stage – off-the-Stage, Guest-Audience and Sponsor-Participator.

In the afternoon on May 12, 2016, Mr. Ardy Lee, FlyingCodes CEO, had a heated discussion with other guests about what should modern outdoor media in this Internet age act to link big data and make use of technical breakthrough to bring better user experience in terms of “One-stop, Visualized and Third-party Implementation Mode”. During such discussion, Mr. Ardy Lee made a brief introduction of the origin of FlyingCodes, the close relation between FlyingCodes and its surrounding scenes as well as one of FlyingCodes advantages— Point &Connect. In addition, Mr. Lee, proceeding from Scene-based Interaction-type Advertising Solutions, also made a wonderful explanation of the fresh and novel experience created by the interaction between (FlyingCodes) Point &Connect and various traditional outdoor media including advertising board and screen together with Mr. Huang Tao, the founder of Asia OOH and other insiders. After that, guest questioner talked deeply about FlyingCodes technology and its application in market with Mr. Lee, and vividly discussed how new technologies facilitate outdoor advertising with audiences after the conference.

At the other side, various media were attracted to present at the booth of FlyingCodes. Relevant staffs elaborated their innovative technologies, introduced their unique functions, discussed this industry’s current situation and exchanged their opinions with other media about how to integrate the application of resources in market. Eventually, they all expressed their strong cooperation intention in various aspects.

Mr. Huang Tao, the publisher of Asia OOH, spoke highly of FlyingCodes in this conference, and put forward constructive suggestion and strategy for the combination of new technology with media marketing. He expressed that, for now, FlyingCodes scene-based interaction, as a new interactive link technology of great potential, could give us a promising future.

Receive much Benefit from Experience Sharing

During the conference, FlyingCodes exchanged cooperation intention with various powerful outdoor media operators, meaning that potential partners of FlyingCodes would spread all over China.

As the coming of a new age for the media industry, various new media are good at operating Internet+, and the pure exhibition mode of traditional media cannot win any edge any more. From “Exhibition+Interaction” PC Internet age to “Exhibition+Interaction+Secondary Consumption Stimulation” mobile Internet age, the media industry has experienced a lot. In despite of the alternation of mode, the possession of market is subject to a changeable situation. There is no doubt that, the age closely related to the consumer will definitely be the next inevitable new age for media.

By virtue of simply interactive, diversified technical features (control—interaction-guidance) and powerful analysis ability (scene demand+interaction+consumption guidance+data analysis=precise advertising), FlyingCodes will make full use of its technical innovations to continuously narrow the distance between media and consumers. However, FlyingCodes has taken the initiative and entered the next media age—customized media age.

We’ve cooperated with different partners to promote our FlyingCodes technology in the market, including advertisers, digital signage manufacturers and APP developers, carrying out scene-based interaction through to the end. Meanwhile, we will also make great effort to directly propel the development of FlyingCodes technology in various kinds of beacon equipment in China, Europe and America.

Through deepening relevant exchanges, FlyingCodes will further enhance its brand’s popularity and influence so as to strengthen the technology’s competitiveness in domestic and foreign market on the whole. FlyingCodes always hopes to make concerted effort with other insiders to usher in the new standard for future Internet of Things connection and the new trend of the beacon industry, enabling a much simpler interaction.

At this edition of CITE, GZTech Group, a young and vibrant company, demonstrated to the visitors its advance and innovation in technology, rapidly-growing technology team professional and efficient in cooperation, innovative technology exhibition, and new ideas of connection and interactivity for the future. The event also saw the Group showcase its R&D achievements and technologies in the past year, including Smart-Ring (smart adapter), simple beacon equipment Lodestone for innovation and interaction based on the FlyingCodes interactive technology platform, and a series of innovative technologies and products such as the “Personal Guide@Parking” indoor parking lot solution. The “Personal Guide@Parking” indoor parking lot solution, in particular, drew serious attention from the visiting industry observers for its real-time tips and super-low project costs.

With technological innovation as the theme, GZTech Group displayed at this expo the problem-solving products combining its R&D strength with social development. Its booth at Hall No. 1 caught the attention from numerous attendees who visited or consulted, while the staff enthusiastically and patiently communicated with the visitors. With the wonderful speeches and demonstrations by the staff, the characteristics and advantages of its exhibits were fully demonstrated. After learning about its products to some extent, some professionals and enterprises visiting its booth showed great interest in cooperating with it, indicating that the Group achieved its objective as an exhibitor at this expo – a complete success for the Group.

At an age when swift and great changes are taking place, identifying demands equals a mastery of the future. The FlyingCodes technology platform not only demonstrates its unique application method in every daily scenario; its “Shake & Point” is pretty much an upgraded version of the WeChat “Shake” function familiar to everyone. FlyingCodes will work together with more partners in providing professional and simple solutions for scenario interactivity with a more mature and professional attitude.